While the printing industry is still battling with the difficult transition from a traditional film-based printing environment to a digital workflow that goes directly to the press, another revolution quickly gains momentum in the same context. Adobe's application Acrobat and its portable document format PDF have attracted the attention of major prepress system manufacturers and software developers. They worked together to develop an open PDF-based printing architecture to capture the printing industry.

Adobe's Postscript technology can copy fonts of any size, density and style, and print them with smooth edges, continuous tone images, and complex artwork, with few dots appearing in the wrong place. Before the end of the 1980s, Apple Computer, AlDus, and Lenordip began selling hardware and software based on Adobe's revolutionary new code.

Postscript programming languages â€‹â€‹continue to develop in the 1990s, but there are also some unpleasant obstacles. In the development of "new printing industry standards", prepress companies began to publish many standard scripts based on the Postscript format. This led to a platform where there are dozens of formats, thousands of new fonts, and new media. The messy situation of new delivery systems and new output devices. As a result, many "dialects" of the Postscript language appear, and the documents interpreted by each dialect are different.
Postscript becomes the de facto standard for all prepress operations, but there is a growing need for more stable and predictable file output.

Finally, Adobe released the Portable Document Format PDF in 1996. As has been the case in the past, PDF is a vector-based file format, but the PDF interpretation process is based on an intrinsic goal-oriented standard rather than an external configurator that configures specific glyphs. Its success is based on the fact that interpretation occurs in the file generation process rather than the raster image processing.

As a result, PDF files are always interpreted the same way regardless of what PostScript RIP dialect is used for output. PDF is also universally compatible with almost any computer platform.

The PDF format originally targeted the business community. It is a method of converting official documents and forms into digital files so that they can be quickly transferred from one desktop system to another and remain as they were. Anyone who accesses the Internet can download the application Acrobat Reader for free and view it as a soft proof on a computer monitor or print them on a laser printer as a hard copy.

Although earlier versions of PDF did not provide the high-end data needed to run the prepress environment, many publishing professionals saw the potential to apply PDF to commercial printing and encouraged Adobe to expand the capabilities of its application Acrobat. Creo Products Co., Ltd. is one of them. The company is an important supplier of computer-to-plate systems, thermal imaging equipment, dot copy scanning systems, and prepress workflow management software. As a leader in Creo's workflow technology, Dave Kauffman saw the prospect of the PDF file as early as 1996. He is the principal designer of Prinergy (print and energy) for the Heidelberg/Creo automated digital prepress system. The Prinergy system is based on the Adobe Extreme and PDF formats for print architecture used by prepress and commercial printers.

He said: This was a controversial decision in 1996 because the early application Acrobat 2 was not designed for the printing environment. However, we realize that it will succeed in the next few years by becoming an Adobe OEM (Initial Equipment Manufacturer) partner and have more impact on the development of PDF format and work more closely with Adobe to ensure Its application Acrobat is prepared for prepress.

The main advantage is that Adobe launched the Distiller plug-in on the market at a very reasonable price. Previously, this Adobe technology was only embedded in the RIP of the imagesetter, and the price was between 1 and 20,000 US dollars. By using the same Adobe core technology and putting it in a $350 package, it's enough for designers to use Distiller in Acrobat 4.0 to create a satisfying PDF file.

More than a hundred errors were corrected in Distiller processing between Acrobat 3.0 and 4.0. Most errors affect high-end production issues such as paths, multiple images, and high-resolution graphics. In order to get PDF into the prepress environment, a lot of experiments have been done on these high-end performances.

Among the enhancements from PDF to the printing press are: Improved ability to retain image separations; Adjust minimum line width to ensure that output from high resolution devices can be unchanged on the press; Remove Postscript printers that cause application failures Control features; generate automatic trim boxes; maintain font and resolution integrity; maintain spot color integrity.

Unlike earlier versions of software, Acrobat 4.0 retains spot colors instead of automatically mapping them to the corresponding CMYK. Because it is difficult to identify spot colors in PDF files, vendors of plug-in tools have developed tools that allow users to click on file elements and check for actual spot colors.

In page generators such as PageMaker and QuarkXPress, spot colors are separated in the prepress workflow along the cyan, magenta, yellow, and black channels. You need a high-end prepress system to generate composite colors - the format required for color management and make up, so you can generate accurate contract proofs (color files for print jobs that users sign for approval).

Color management is really critical in the prepress area because contract proofs must be exactly the same as the ones printed on the machine. Makeup whitening is also important because it helps offset ink color and printer ink offsets to avoid whitening between printed colors on the print.

Acrobat 4.0 introduces the Smooth Shading function that printers commonly call color-blending transitions, gradients, or imaginary halos. Until Postscript 2, it has only 256 levels of grayscale. Although this looks very fine on desktop printers and even on inkjet printers IRIS, it can be seen in a step-like manner when it goes to a plate imager. With Acrobat 4.0 and Postscript 3, you have 4,000 shades of gray, enough to generate a large area of â€‹â€‹smooth halo without any banding.

PDF also supports dot copy data integration. Site copy scans are used to generate digital files of previously separated data (such as full-page color advertisements provided by advertising agencies). In the dot copy workflow, the color separation sheets are stacked one on top of the other so that each color becomes transparent and mixed with other hues. The only drawback of integrating the dot copy data into the PDF file is that you can only see the last color in the PDF file, despite all the colors. However, this problem can be corrected during the raster image processing stage so that the document can be accurately viewed from the screen in the final step before printing.

Orient IRIS-UV LIGHT is a new generation of CTCP Plate to meet the market requirements for speed and efficiency.The new photosensitive layer and stable production process not only increase the sensitivity 25% higher,but also maintain the excellent performance of the plate making and printing as before,which is the best choice for offset packaging and commercial printing. 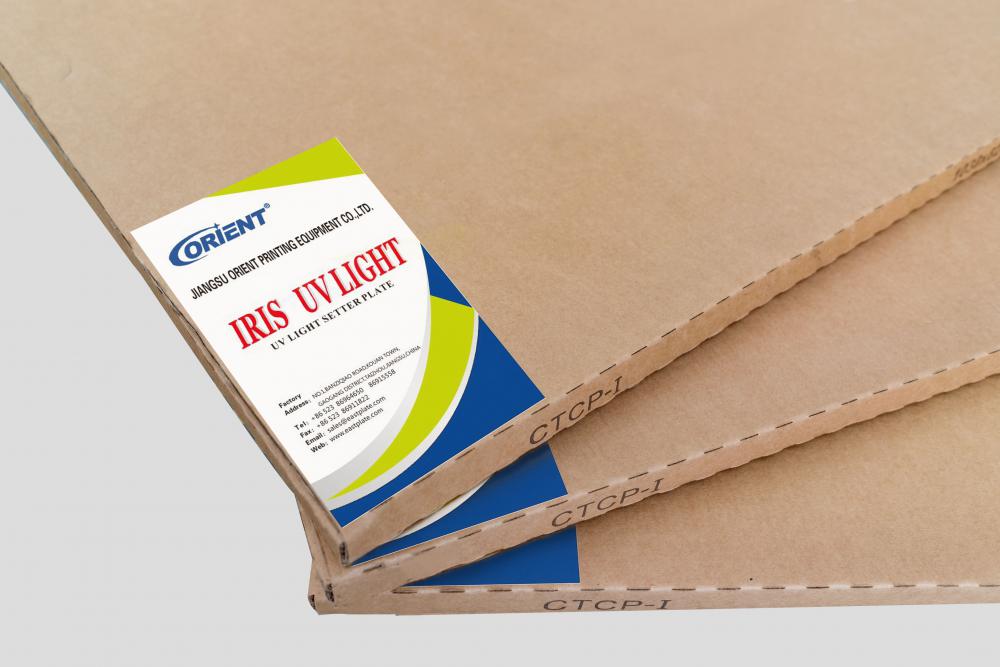